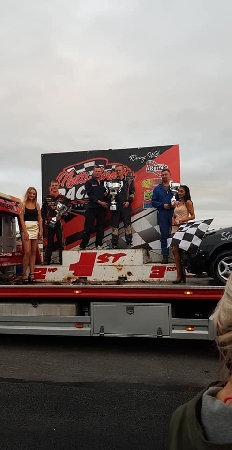 Local lad Jack Kennedy was literally on top of the World after scooping glory in the 2019 ORCi Stock Rod World Championship at Nutts Corner Raceway on Saturday 14th September.

The grid positions for the showdown were determined by a qualifying session which was split into 5 different blocks, giving each driver 5 minutes of track time. After the times had been recorded and verified the former European Champion Raymond Harper emerged as the pole sitter with Scottish ace Dean McGill next. Row two of the grid was comprised of Jack Kennedy on the inside and the former World Champion from Scotland Michael Bethune on the outside.

Each driver completed a parade lap, waving at their fans and collecting a commemorative award before they got buckled up. Once the usual World Final build up was concluded the drivers fired up their machinery ready to do battle over the course of 40 laps.

At the fall of the green flag Harper got away in text book fashion while McGill and Kennedy battled for second place along with Bethune. Kennedy soon took over in second while McGill got trapped on the outside line losing several places. As the race settled Harper still held sway out front but it was clear that Kennedy had stronger pace and was chasing him down. Behind the leaders Adam Sloan and Shea Duff were making strong progress through the field and already up to third and fourth. With the race now on lap thirteen the leading duo were as one and after some perseverance Kennedy moved through to the top spot, demoting Harper to second with Duff now safely positioned in third. Kennedy continued to command the race with comfort while Harper found himself under attack again, this time from Duff as the race neared the lap thirty mark. The pair exchanged places several times for the next few tours of the raceway until Duff got a slight break which allowed him to pull clear of Harper. Behind the front runners was another interesting dice between the Scots; James Gray Jnr, Bethune and Stuart McKinnon while England’s Rhys Longdoun and Andrew Morrow were performing strongly within the top ten. At the helm it was still Kennedy who completed the last ten laps unhindered to crown himself World Champion. After a sturdy performance Duff claimed the runner up spot with Harper third. The top six placing’s were filled by Longdoun, McGill and Morrow.

After the World Final all attentions switched to the Gold Cup title, with the drivers contesting two heats on Saturday night followed by a further two qualifiers on Sunday before the title decider. Saturday’s heat wins were shared between Joseph Largy and Thomas McCrory Jnr while Adam Sloan featured prominently securing second
place in both events.

McCrory went on to win both of Sunday’s heat races although a non-finish on Saturday evening would see him denied pole position for the trophy race. With all the points tallied Largy was the pole sitter with Sam McKinstry alongside, and then it was Sloan Harper and McCrory. Largy had a nightmare start which seen him drop well done the placing’s while McKinstry got off to a flyer and safely into the lead although close behind was Sloan, Harper, Largy and Kurtis Reid. The race continued in this fashion for most of the duration, until Sloan got a slight gap on the inside coming off turn two. Sloan didn’t need a second invitation and quickly moved into the open space however McKinstry made an attempt to defend which resulted in him spinning out of contention. Sloan reeled of the remaining laps to take the honours, Harper was second with Largy third.

High on Saturday evening’s agenda was the 1300 Stock Car Irish Closed Championship. The season long point’s chart dictated the grid makeup. Nicky Lowry occupied pole beside Calvin Blake, behind was Ryan Stewart and Fionn Donnelly. The sparks were sure to fly and indeed they did as Lowry and Stewart engaged in an early clash which allowed Blake to hit the front briefly, before a caution period for debris on the track would regroup the cars once again. On the resumption Lowry regained the top spot while Robbie Wright, Blake and Stewart scrapped for second allowing Lowry to break free. After a few laps of lively exchanges Stewart cleared himself from trouble and set about catching the leader. As the race advanced Stewart was unrelenting and after some laps caught up with Lowry and made his move for the top spot. Stewart made a failed attempt on moving Lowry and at the second time of asking he issued a more sustained blow which would see him move through to the lead and crown himself Irish Champion, Lowry was the gallant runner up with Blake third.
A lively Irish Revenge race followed which was a reverse grid of the Irish. Stephen Gilmore was the pole sitter this time around. The race burst into life in chaotic fashion with Josh McKinstry and Gilmore early casualties. Blake was the man to beat this time around taking the win after surviving a late bout from Stewart. The 1300 action was completed by a Dash for Cash event where Stewart took the honours once again.

Saturday Support Round Up.

Completing Saturday’s billing was the Brisca F2 Stock Cars and Micro F2’s. A pleasing entry of fourteen F2’s was in action for heat one, which turned out to be a lively affair with two caution periods required. Graham Fegan enjoyed a fine run through from the red grade to take the win. Cullybackey’s Curtis Greer commanded proceeding’s thereafter taking honours in both heat two and the final. The final podium was completed by Fegan and Craig McConnell.
The youngsters in the Micro F2’s enjoyed three trouble free events where Riley Dawson, Joshua Murray, Amy Morrow and Ava McCreight were among the top performers.