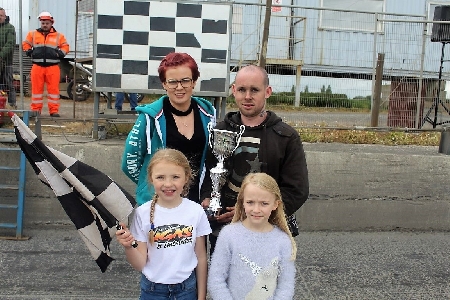 In what was a fun filled afternoon of Micro Banger action the Bad Company team crushed the opposition in style. Aaron McGraw was the first to put points on the board when he picked up the win in heat one after his team mate Leonard Dunn run into trouble in the closing stages. Local lad Matthew McKinstry was the long-time leader of the second encounter, however as the race neared its conclusion he found himself launched into a pile up on the river end. Dunn moved through to take the win which had eluded him earlier in the afternoon. The meeting final was another crushing affair which seen the Bad Company trio of Dunn, Karl Smyth and Stephen Boyd run at the front throughout. The team members traded places while eliminating anything else in sight, as the chequered flag dropped it was Smyth who took the win with Boyd and Dunn next across the line. The final turned immediately into a Destruction Derby which was soon halted as Matt Milliken needed some assistance after a big wreck on the Airport bend. After some chaotic action the field soon dwindled until just Smyth and Johnny Murdock remained. The pair brought the action to an end quickly however with a spectacular head on contest on the back straight which resulted in both cars expiring. The result was declared as a dead heat. There were a number of other awards presented with Smyth also picking up entertainer of the day title. Sheldon Murray was awarded wreck of the day for the damage sustained to his Nissan Micro while McKinstry was acknowledged for his well turned out Vauxhall Corsa which was labelled the best presented car.

Support Formula Round Up.

The yellow graded Mazzy McCreight got his afternoon off to a promising start in the Brisca F2 Stock Cars with a run-away win in heat one. Heat two was a somewhat more robust affair with a spectacular moment for Sean McFerran when his car took to the air as it almost tipped over. Away from the drama was the Irish Open Champion Gavin Fegan who comes through from the red grade to take the win. Mark Rainey set the pace for most of the meeting final however as the laps ticked away Fegan closed the gap and took over out front. Fegan completed the remaining laps to take the honours ahead of Rainey and Craig McConnell in third.

In the Stock Rod section former Junior Rod star name Matthew Drysdale continued his promising transition to the senior ranks with a flag to flag victory in heat one. Daniel Rodgers set the early bench mark in heat two before Ian Thompson Snr turned up the pace to move through and take the honours. Come the final the heat winners Drysdale and Thompson were the frontrunners until the duo clashed on the back straight resulting in a caution period. The race suspension played into the hands of the star graded Jack Kennedy who took up the running soon after the resumption, once Kennedy got to the front he continued to stretch away from the pack taking the win in style, Matt Milliken was second with Raymond Harper third.

Christopher Cardwell was the winner of Junior Rod heat one before Jason McMullan used his white grade starting slot to full advantage taking the silverware in both heat two and the meeting final, Jack Morrow enjoyed a clean run through to secure a runner up finish in the final with Odhrann McGeown third.

In the 1300 Stock Cars Ryan Stewart and Nicky Lowry shared the heat wins before local teenager Joshua McKinstry romped to an unhindered triumph in the meeting final making it two final wins on the trot! Fionn Donnelly was the second place finisher with Lowry third

Also in action was the ever growing Street Rod formula. David Brown enjoyed victory in heat one before fellow white grader Richard Nicholl secured the heat two glory. The rapid Brown was an early casualty in the feature race spinning early on. Adam Simpson took over at the front and held the advantage most of the race until Dan Robinson slipped though on the closing laps to scoop the silverware, Simpson was the gallant runner up with Nicholl third.

The eagerly anticipated Caravan Destruction Derby was the final event of the afternoon. The large gatherings of onlookers were awarded for their patience, as fourteen caravans took to the track. As the saying goes.. Save the best to last!! This was the case, as the drivers went straight into battle with caravans falling to pieces all around; it was chaos from start to finish! After the dust had settled Johnny Lorimer emerged the victor.