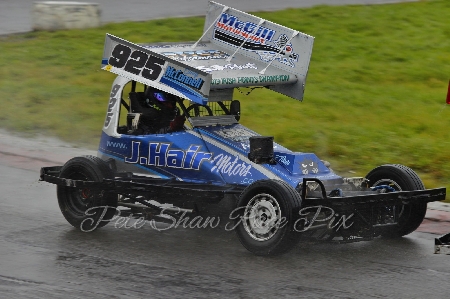 It was an afternoon of high drama at Nuttscorner Raceway to conclude the 2020 season, with seven formula’s as well as the now annual NI Car Jump on the agenda.

The season finale event for the 2L Saloon Stock Cars, Brisca F2 Stock Cars, 1300 Stock Cars and Junior Rods was the Golden Helmet Championship, with the Rookie Bangers racing for the King of Nutts Corner title while the Back to Basic Bangers and Micro F2’s were on domestic duties.

Bangor’s Craig McConnell performed a faultless double victory in the Brisca F2 Stock Cars, taking the win the 2020 Golden Helmet before bagging the revenge race honours also. Stephen McCready was the feature race pole sitter with McConnell starting alongside; the scene was set for a fine dual. McCready took up the early running however it wasn’t long before McConnell made his move for the lead, McCready returned fire, spinning himself in the process. This paved the way for McConnell to edge further clear and indeed take the victory, McCready recovered well to secure the runner up spot ahead of Thomas Greer in third.

Former Junior Rod star Jonathan Brown stamped his authority in the 1300 Stock Cars as they also contested the Golden Helmet. Brown who has enjoyed a successful start to his 1300 career commanded proceedings right from the off. The local lad who started from pole position completed the 20 lap distance unhindered to take the honours; Ryan Stewart claimed the runner up spot ahead of Fionn Donnelly. Donnelly managed to escape the carnage to take the win in what was a lively revenge race.

Arguably the most anticipated race of the afternoon was the 2L Saloon Stock Car Golden Helmet Championship final. The hard hitting no holds barred Saloons are experiencing something of a renaissance currently in the province with several new drivers joining the ranks as well as the return of some former star names. The 15 car grid for the title decider was formed in order of points scored from all the meetings since the return of racing after the Covid-19 outbreak. Armagh’s Geoff Martin and Portglenone’s Sean McFerran occupied the front row of the grid, while former 3 time Irish Champion Ryan Wright joined the current Irish title holder Matthew Stirling on row two. At the drop of the green flag Wright quickly dealt a blow on the pole sitter Martin to move through to the front in the opening lap, Martin established himself in second spot briefly before the bumpers went flying in which reshuffled the pack including a spin for McFerran. All the while those behind exchanged spots Wright continued to increase his advantage at the front, completing the 20 lap race to take the win and the title for the second time. Joining Wright on the podium was the McIvor Brothers with Anthony in Second and Kieran third. A revenge race concluded the 2020 saloon season where McFerran took the honours.

Jack Morrow continued his recent spate of good form in the Junior Rods where he out performed his rivals to land the Golden Helmet title in style, the Rathfriland youngster kept his calm throughout, completing the distance to claim glory. Calyn People enjoyed a fine run also to pick up the runner up spot ahead of Ryan Dilly.

Andrew Russell and Alicia McConnell were the star performers in the Micro F2’s, recording first and second place finishes respectively in both events. Each of the youngsters taking part received an award kindly sponsored by Bonar’s Quarries and Arbuckle Auto Repairs.

Adding to the excitement of the afternoon there were two Banger formula’s on display. Josh Goligher had a successful run in the Rookie Bangers picking up the King of NuttsCorner title. William Donnell bagged the Back to Basics Banger Final victory before David Gurney to the DD spoils.