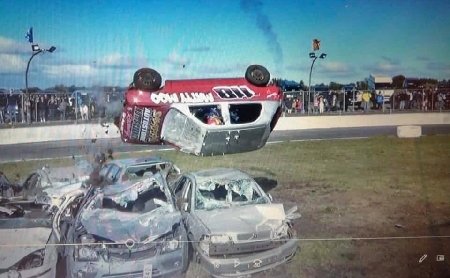 9 cars took to the grid for the biggest race of the domestic calendar, and the final race of the season for the 2l Saloons. Defending champion 711 Anthony McIvor led the pack off with brother, Kieran rounding out the front row. There was carnage from the off as former Irish champion 153 Ryan Wright had a pop at A. McIvor in the first bend with K. McIvor following suit and landing a heavy blow on the 153 machine. The drama all fell into the hands of 747 Matthew Stirling, as he emerged from the drama unscathed after making a good start from row 3 of the grid. K. McIvor added to the thrills of the race once again as he followed Wright and Darryl McCammon into the turn 4 wall, meanwhile out front 747 had pulled a tremendous lead on second placed A. McIvor, leaving to believe the race was done and dusted; But A. McIvor had different ideas as the last lap board fell, A. McIvor took a mega dive at Stirling in the last bend, but unfortunately for Anthony his shot at a record breaking 5 Irish Championships in a row had vanished as Stirling cruised to his first Irish Championship victory. Stirling was followed over the line by A. McIvor and McCammon.
Anthony McIvor rounded out the afternoons racing with a win in the Irish revenge race.

Micro Bangers also featured with an added twist from the norm, with the track being used in a figure-8 format. Matthew McKinstry emerged the victor in the Figure-8 Championship with William Donnell runner-up and Rodney Herron a rightful third place.
McKinstry also took home the silverware from the DD.

The Car Jump made a successful impression for the first running of such an event in Northern Ireland. 15 brave drivers faced round 1 of the NI Car Jump Championship, with some excellent attempts at clearing the cars that had been laid out; unfortunately for some of the 15, the Jump was too much for the cars ending their day early. Round 2 had a little spice added to the mix for whoever could salvage their cars, with the take-off ramp being raised in height; and it wasn’t long until the distances soared. A few attempts was given to narrow the cars down, and an eventual winner was found in the form of, 14 Clarke Frazer who was crowned NI Car Jump Champion 2019.
Talks have already been on the table with NuttsCorner organisers for next year’s NI Car Jump Championship.