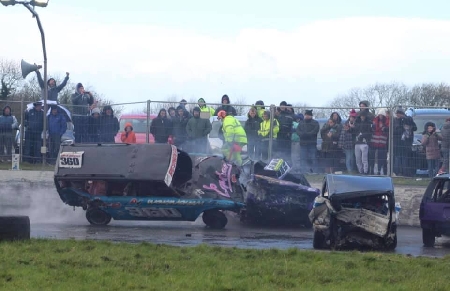 Nutts Corner Raceway staged the third running of Paddy Whack, which has now become one of the Province’s largest Banger racing events. The meeting doubled as a retirement meeting for the majority of the Last Rites team, who have been around for more than a decade but for some of their members they have been racing for a lot longer!
Drivers assembled at the local venue from all over Ireland and the UK as well as drivers from Europe.

Sunday afternoon seen the Unlimited National Bangers take to the track in force as they contested 5 busy heats before the European Masters Championship Final. There were plenty of bruising encounters during the heats, none more so than a massive hit received by Michael Flaherty at the hands of Jackstar who spectacularly rolled over in the process. The heat wins were shared between Sheldon Murray, Rob Bugler, Dan Steele and Stephen Reynolds. 24 cars started the European Masters final but it was not long before a brief but big snowstorm descended on the track and played havoc with the drivers. After another action packed showdown James Guppy won ahead of Kieron ‘’Chattyman’’ Fry and Steely Dan. A demolition Derby concluded the day and given the amount of damage during the day and the snow it was an excellent 16 cars that made it back out for one last crash. The 16 cars soon dwindled, when all was said and done Dan Steele was declared the last man standing and indeed the winner.

Sunday Support Formula Round Up
The BriSCA F2 Stock Cars added a further contact feel to Sunday’s event as they contested their annual Gold Cup Championship. Craig McConnell was the first to show with victory in heat one before Belfast’s Ted Holland held of Gavin Fegan, to take a well-judged win in heat two. With the points tallied from the heats Fegan and McConnell shared the front row for the decider. Fegan made a good escape early in the race while McConnell dropped back, after the pack pushed him to the outside line. While Fegan continued to lead the way McConnell was on the comeback and it wasn’t long until the pair clashed as they battled for the top spot. The tangle up resulted in damage for Fegan which forced him to retirement, Sam McKay took over at the helm with Greer and McConnell next in line. A Yellow flag was called for debris on the track which regrouped the cars once again. McConnell quickly made his move on McKay, to move back through to the front. McConnell completed the distance to take the title, McKay was the gallant runner up with Greer third.
The Stock Rod field was boosted by the very welcome visiting duo of Dean McGill and World Champion Lee McGill. It proved to be a very worthwhile visit to the province for Dean, as he swept the board with victories in both the heats and the meeting Final. Daniel Rodgers showed promising pace in the final to secure second spot ahead of L McGill who enjoyed a clean run through the pack. D McGill’s strong performance will hopefully attract him back to this side of the Irish Sea for next month’s Irish Open and Yokohama Tyres Championships.