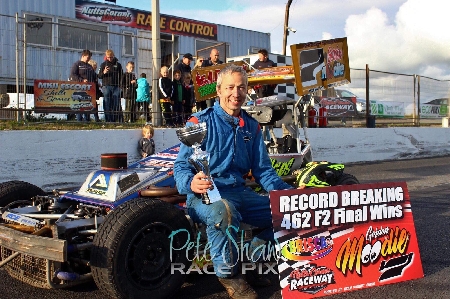 Champions crowned at the Raceway!

In an afternoon of all action Stock Car racing several champions was crowned at NuttsCorner Raceway.

The first title action of the day was the Brisca F2 Stock Car NI Oval TV Grand National Series Finale. With the season long series points tallied, it was Bangor’s Craig McConnell who started of pole position. McConnell anticipated the start to perfection and was able to break free of his pursuers in the opening laps. Stephen McCready took up the running in second place just a handful of car lengths behind McConnell but was unable to close the gap throughout the race. McConnell took the honours ahead of McCready and Lee Davison who demonstrated good pace in the showdown. With the Grand National Series concluded the F2’s completed the afternoon with a full race format of two heats and a final. The grid was swollen with the welcome addition of Gordon Moodie from Scotland who is the current World Champion. Local man Thomas Greer romped to victory in both the heat’s before Moodie cranked up the pace to capture the meeting final glory in style. Adding extra significance to proceedings, it happened to be Moodie’s 462nd final victory which is a new Brisca record formerly held Bill ‘The Master’ Batten. Davison was the runner up ahead of McConnell in third.

After the National Championship the night before at Aghadowey Oval, the 1300 Stock Cars were back to business on day 2 as they contested the Irish Open Championship. The lower graded drivers commanded proceedings during the heats with Gareth Halliday and Ben White from England sharing the spoils. The newly crowned National Champion Ryan Stewart was another who featured well in the heat events placing second and third respectively. The heat winners Halliday and White shared the front row for the feature race. Not long after the green flag Stewart quickly moved through to the front and soon stretched well clear. While Stewart held sway out front it was a more rowdy picture behind with several clashes for position taking place. A bruising clash between William Stewart and Jacob Bromley required a caution period which would see the cars regrouped. During the race suspension the long-time leader Stewart become involved in an incident which would see him disqualified by the steward. On the resumption this moved Robbie Wright to front with Nicky Lowry and Dan Booth in tow. Wright got into a smooth rhythm gradually pulling well clear while Lowry and Booth battled it out allowing Calvin Blake in on the mix. Wright completed the laps to take the win with Blake surviving a last bend assault from Booth to take the runner up step on the podium.

It was Irish Championship time for both the Group Two Lightning Rods and Junior Rods. The Junior Rod pole sitter Jack Morrow took the chequered Flag after a terrific race long battle with Christopher Cardwell. Cardwell crossed the line second with Jonathan Brown third. This is not where the story would end however as Morrow and Brown both were disqualified following post-race scrutineering. Christopher Cardwell was then confirmed as Irish Champion with Cole McFall and Odhrann McGeown the other podium finishers. Cardwell went on to claim victory in the Irish Revenge race before Sam Stewart secured the heat win. Clive Wilson has been the form man off late in the Group Two Lightning Rods and demonstrated this once again when he captured the Irish title in style ahead of Paul Nesbitt and David Nesbitt. Buckna’s Matthew Curran put his name to the Irish Revenge race before George Esler rounded out the afternoon with a heat win.

The support action was provided by the Stock Rods and 2L Saloon Stock Cars. Matthew Mckinstry opened his win tally with a fine victory in heat one before Kell’s man Adam Sloan the current Gold Cup Champion cruised through to take the heat two spoils. McKinstry had the bit between his teeth come the final, providing a master class to secure his second win of the day. Sloan was again on the pace to come home second with Thomas McCrory Jnr third. Robert Mawhinney continued his current run of form in the 2L Saloon Stock Cars, where he sailed to victory in the opening heat. The drivers faced tough conditions in heat two thanks to a passing rain shower; Mawhinney was an early casualty this time around. Matthew Stirling took over at the front early on with Ryan Wright close behind. A few car lengths separated the pair throughout until the last bend when backmarking traffic come into play, Wright edged Stirling wide and got to the inside setting it up for a grand stand finish as the duo scrambled towards the finish line, Stirling got the better exit and took the honours with a few feet to spare. With the woes of heat two behind him Mawhinney was back on commanding form in the meeting final where he broke well clear of the competition to take the honours, Stirling was gain on the pace to capture second ahead of Anthony McIvor.