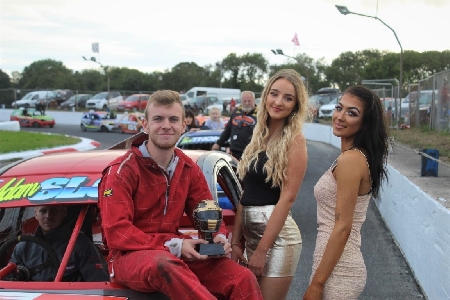 After the World Final all attentions switched to the Gold Cup title, with the drivers contesting two heats on Saturday night followed by a further two qualifiers on Sunday before the title decider. Saturday’s heat wins were shared between Joseph Largy and Thomas McCrory Jnr while Adam Sloan featured prominently securing second place in both events.

McCrory went on to win both of Sunday’s heat races although a non-finish on Saturday evening would see him denied pole position for the trophy race. With all the points tallied Largy was the pole sitter with Sam McKinstry alongside, and then it was Sloan Harper and McCrory. Largy had a nightmare start which seen him drop well done the placing’s while McKinstry got off to a flyer and safely into the lead although close behind was Sloan, Harper, Largy and Kurtis Reid. The race continued in this fashion for most of the duration, until Sloan got a slight gap on the inside coming off turn two. Sloan didn’t need a second invitation and quickly moved into the open space however McKinstry made an attempt to defend which resulted in him spinning out of contention. Sloan reeled of the remaining laps to take the honours, Harper was second with Largy third.

On Sunday afternoon the Street Rods relished the opportunity to perform on the big stage at the speed weekend, as they contested their Irish Championship. Warren Thompson proved to be unstoppable once again when he romped to victory in the main event ahead of David Brown and Shannon Morrow. Brown was able to go one better in the revenge race taking the spoils ahead of Thompson and Morrow. The young lady racer Morrow topped off what was already a good afternoon with a win in the allcomers heat.

The Group 2 Lighting Rods and Juniors were both on gold cup duties. In the Group 2 Lightning Rod’s Randalstown’s George Esler and Ballymena man David Gillespie shared the heat wins. After what was a lively final Wilson was first across the line, however he found himself penalised by the meeting steward for contact. This promoted Gillespie to the top spot hence claiming the Gold Cup title, David Nesbitt was the runner up with Wilson demoted to third.
The Junior Rods were also delighted to be part of the Stock Rod World Final weekend as they raced for the 2019 Gold Cup. Odhrann McGeown was the first to success with a win in heat one before star name Jack Morrow claimed the honours in heat two. In similar fashion to the Group 2’s the final was a somewhat energetic showing and again first across the line found himself at the mercy of the Steward. This time around it was Jack Morrow docked down to third, this promoted Christopher Cardwell to the win with Jonathan Brown second.

Completing the busy race card was the all action 2L Saloon Stock Cars. The grid was swollen with the welcome addition of Scotland’s William Mitchell. A passing rain shower left the track surface slippery for heat one which had the drivers struggling for traction. Kieran McIvor conquered the conditions to take the win before Mitchell got his hands on the flag in a dry heat two. Blue grader Daryl McCammon enjoyed a trouble free run in the final to take the glory ahead of Mitchell and Winston Weir.